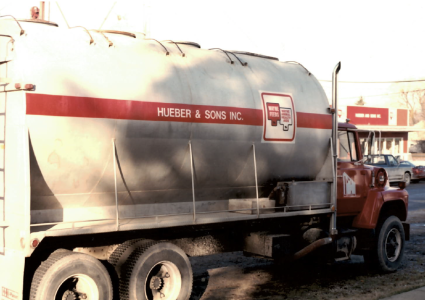 Hueber/Dekalb Feeds has a rich history in the Midwest as a partner of local farmers operations for over 50 years. Hueber/Dekalb Feeds is a family-owned company who continues to play an intricate role in the livestock industry with innovative livestock feed rations and supplements as well as production management and farm consulting services. While the business has grown over the years, our values have stayed the same: we pride ourselves on being a partner in your operation; we stand behind our commitment to our customers; we understand the responsibility we undertake as a part of the food chain.

Hueber Feed, LLC was established in 1982 when twin brothers Jan and Jon, as well as their father, Allan, joined in business together as a livestock feed dealership in Creston, IL. At the time, Hueber Feed sold bags and bulk feed and they were the only three employees of the company. Hueber Feed invested in manufacturing capabilities when they purchased the Shabana, IL facility in 1985 as well as the Holcomb, IL facility in 1988. The addition of these facilities not only provided feed manufacturing to the Hueber Feed portfolio but also expanded their footprint in the Midwest. These facilities were the first steppingstones to providing feed products to more species and farmers in the area. Over the years, Hueber Feed built a brand-new feed facility at their Creston, IL location in 2005, purchased their fourth location in Roanoke, IL in 2016 and added new technologies to their current facilities.

Today, the Hueber Family continues to own and be involved in the day-to-day operations of the business. Jan Hueber passed away in the Fall of 2021, but his son, Matt Hueber, is the Vice President for the company as well as Jan’s daughter, Kristen, who manages the Shabbona Store. Jon Hueber continues to be involved as President of the brand. Jon has two sons, Jordan Hueber and Jacob Hueber, who also serve the company. Jordan Hueber is the Holcomb Mill Manager and Jacob Hueber is the Logistics/Procurement Manager.